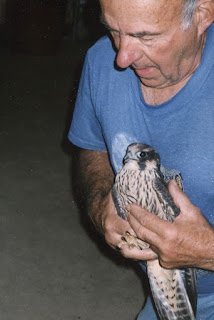 In May, 2016, we lost one of Lycoming Audubon’s stalwart members, Ed Reish. He was remembered fondly at the most recent LAS meeting at the JV Brown library.

Ed served on the LAS board for 33 years in various positions, either the conservation chair or a director at large. Ed was talented as a “builder”, and he made many items the chapter used for years, such as the box for toting equipment to meetings and a huge peregrine falcon silhouette to advertise a project. He also crafted name tags for every member of the board while he was active, and was responsible for acquiring the Lycoming Audubon logo pins that many of us wear. In 2012 Ed was named the chapter’s only “Director Emeritus”.

Ed became a licensed wildlife rehabilitation professional, a job that takes enormous dedication. He and his wife Tink operated Farragut Wildlife Rehabilitation out of their home on Carey Hill Road just north of Montoursville, from 1988 until 2005. Injured and ill wildlife need round-the-clock care, including feeding, administering medication and dressing injuries, a job that doesn’t provide a day off or a vacation. Ed and Tink received no federal or state money to operate the facility, but instead relied on their own modest resources and donations, especially from a few local organizations, to care for these animals.

The PA Game Commission and countless individuals took many different species of birds and wildlife to them over the years, including nearly every kind of raptor found in our area or migrating through. Some 300 animals passed through their facility every year, and about 75 percent of them were birds. Over the years they cared for Golden and Bald Eagles, ospreys, a peregrine falcon, countless owls of every species, loons, herons, and vultures. Two unique birds they rehabilitated were a Cory’s Shearwater (a Mediterranean bird) and a Tundra Swan. One Bald Eagle, injured in the nest, was rehabilitated but was unable to be released to the wild, and is now living in the Washington Zoo. Quite a few bobcats were treated at Farragut along with black bear, white-tailed deer, opossums, and way-too-many rabbits. At our recent LAS meeting, Ron Beach recalled checking on a bobcat he had taken to Ed some years earlier, and he asked Ed how it was faring. Ed said that he had a problem...the bobcat had somehow escaped from its cage and was hiding behind the sofa in the living room! Another favorite guest was a cute baby beaver that would make a funny noise as it begged for more milk.

A favorite story of Tink’s involved a Common Loon, which was put in the upstairs bathtub for an overnight stay. Somehow Ed was in the wrong place at the wrong time, and loon poop ended up on his hairless head. But even funnier, is that Tink made him wait until she retrieved a camera to get a photo, which she shared at a LAS board meeting.

Their expertise and experience created a demand for speaking engagements, and Ed presented dozens of programs to Boy Scouts and school groups of various grade levels in Lycoming, Tioga, Sullivan and Bradford counties. He frequently took along a rehabilitated but un-releasable bird of prey to promote wildlife education. The total amount of time devoted to conservation education by Ed is unknown, but phenomenal.

Ed was extensively involved with the Osprey Project centered at the Tioga-Hammond Lake complex in Tioga County, a two-year project spear-headed by Don Nibert of Penn College. This chapter’s Peregrine Falcon Reintroduction Project in downtown Williamsport was initiated within the chapter by Ed, and the five-year effort resulted in the release of 21 Peregrine falcons. Some of these birds, identified as Williamsport releases through their leg bands, found mates and raised young of their own in Pittston, PA, and as far away as Montreal, Canada.

Ed was also a key figure in the Game Commission’s study of bobcats with biologist Jack Giles, trapping and tagging them with radio collars. These projects involved countless hours of volunteer time and vehicle miles.

Ed had many friends, and was admired by everyone who witnessed his conservation ethic and love of all wildlife. He left a mark on Lycoming Audubon that few will match.